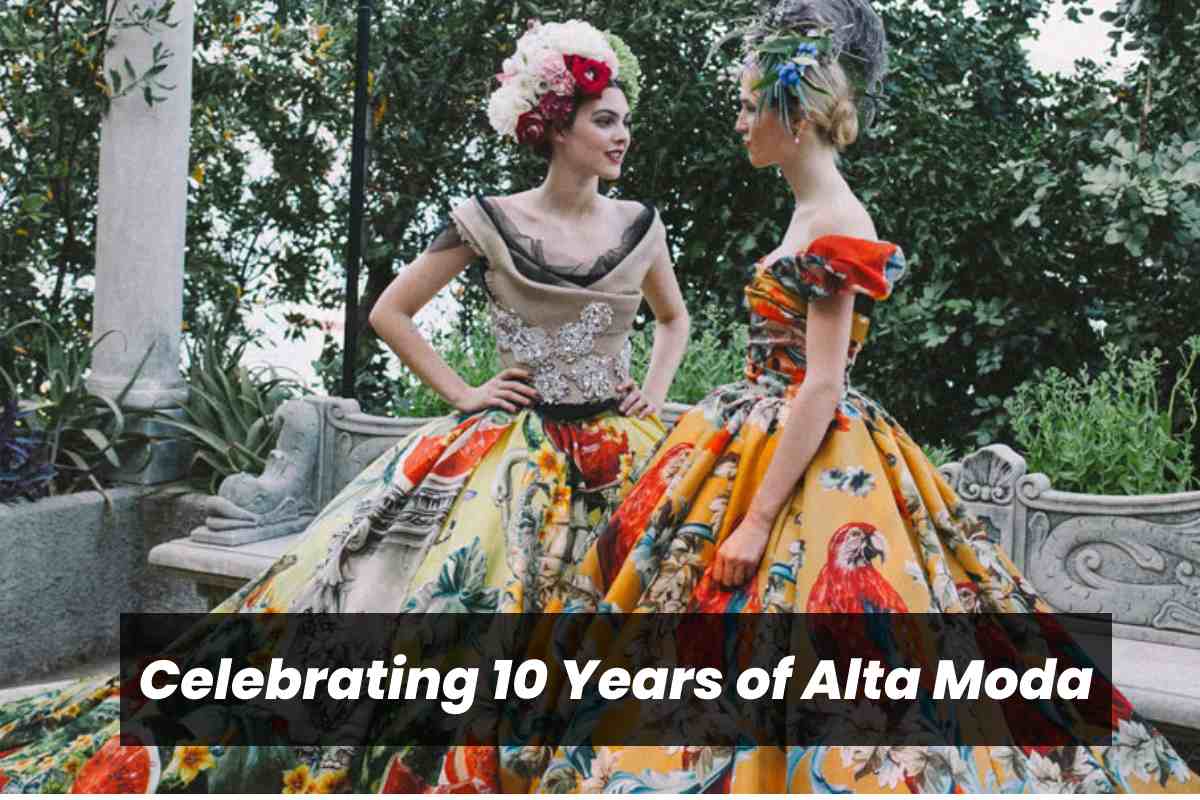 Alta Moda – In July, Dolce & Gabbana celebrated the 10th year anniversary of Alta Moda in Siciliy. The exclusive label, established in 2012 by Domenico Dolce and Stefano Gabbana, has expanded to 750 clientele and continues to shine as the epitome of exquisite and unique style.

Dolce & Gabbana hosted a star-studded event in Siracusa, Sicily, dominating Piazza Duomo for the celebration. Festivities lasted for four days and included a concert, dinner on the beach followed by fireworks, and a reenactment of Pietro Mascagni’s one-act opera Cavalleria Rusticana, a story of jealousy, love, and tragedy. Matching the opulence and draped in history, the event took place in a 13th-century Sicilian castle — a Unesco World Heritage site — the Cathedral of Syracuse.

The guest list for Dolce & Gabbana’s has extended over the years and features fashion models, movie stars, singers, designers, and a star-studded list of actors and models. Celebrities like Mariah Carey, Drew Barrymore, Helen Mirren, Sharon Stone, Dame Judy Dench, and many more attended the celebration.

An added layer of meaning was bestowed upon the tenth-anniversary celebration of Alta Moda this year by virtue of it being a homecoming for Domenico Dolce, who was born in Sicily. What better way to celebrate one’s heritage and inspiration?

Featuring over 100 outfits, the Alta Moda show presented a stylish and unexpected new direction for the collection. Rather than the signature dazzling prints and electrifying color palette, the majority of the outfits on display were a classically inspired range of whites and blacks. While eventually, colors returned to the designs in vibrant, bold, and dramatic fashion, the overarching theme of a monotone palette created a sharp and elegant display. The outfits were inspired by Sicilian widow’s dresses and religious iconographies such as angel wings and saintly effigies. The theme of the show was a tribute to Syracuse, and the collection is an adoration and laudation of the Sicilian woman, a perpetual muse that Dolce & Gabbana return to again and again.

Dolce & Gabbana created their own haute-couture signature when they introduced Alta Moda a decade ago. Decadent style, lush material, exquisite and unmatched in uniqueness, celebrities, and A-list clientele are continually wooed by the power and beauty of Alta Moda. The Alta Moda show has traveled throughout Italy and beyond in the few short years it has existed, and always, each show is a magnificent event — the ten-year celebration is no exception.

Every garment and jewelry piece Dolce & Gabbana create is unique and one-of-a-kind. Alta Moda, which means “high fashion,” is designed to show off Italian craftspeople’s expertise — each piece is uniquely hand-crafted and can take thousands of hours of careful labor to produce. Clients know they are getting authentic, fit-to-measure, impeccable designs that will never be repurposed or resold.

With such exuberant and exclusive designs, the 10-year anniversary of Alta Moda it seems hard to imagine what can top this kind of show, but given the track record Dolce & Gabbana has for consistently wowing the fashion world, 2023 is likely to be even more astounding — and will definitely be worth the wait.

How to Grow your Hair Fast?

When We Were Young: 3 Things We Wish We Knew About Anti-Aging